How many times have you heard/read the term FLATTEN THE CURVE in the last month? Well I guess the answer to ‘how many?’ depends on how much media/political time you do these days. As with all phrase simplifications of a complex concept, flatten the curve can mean different things to different people. For beekeepers FLATTEN THE CURVE is a useful phrase to convey the two most important managements we might consider doing in our apiary in May.

We DO NOT WANT to FLATTEN THE CURVE of May colony population increase IF we are seeking to harvest honey from our colonies unless they begin swarm preparations. It takes bees in the boxes to insure colonies store surplus honey so we can rob them later this summer. We DO WANT to FLATTEN THE CURVE of varroa mite buildup IF we want to improve our overwintering success with those same colonies. We need start now in May before the supers go on to knock down the mite population increase.  NOTE: some locations experienced a nice harvestable surplus April this season IF strong colonies were supered.

May means staying ahead – manage our bees – or they will manage us. Graph shows typical bell-shaped bee growth curve and skewed to right the typical growth curve of mites. We might seek to flatten bee growth skillfully if they begin queen cells and totally fatten the mite growth curve. 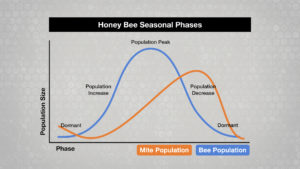 Swarming will flatten the bee curve

Colonies in May should be rapidly expanding. Especially this year with our warmer November, January, first half of March and April weather.  It is normal now for colonies to seek to reproduce via swarming. Our task is to determine which colonies are preparing to swarm. Our major clue to swarming is to look for several developing queen cells, especially on lower/side comb margins.  The easiest way to do this is to split the 2 boxes containing brood (assuming your strongest colonies have expanded into two boxes) to examine the bottom margins of the comb frames of the top box for developing queen cells. You likely will see cups – look for occupied cells.

Note that all cells will not be in this position (as for example in a long hive) but it is a simple and rapid inspection technique to detect colonies that need to be further examined for queen cells.  If no cells in this position the probability is low that a colony will swarm for at least another week. In colonies rearing queen cells in May we might divide (split) colonies with cells so we maintain the majority of bees and open brood in the strong colony insuring colonies capable of storing surplus. Alternately kill all developing queen cells and transfer 2-4 frames of mostly capped brood to weaker colonies. A third alternative is to create new nucs by transferring frames with their queen cells to make smaller colonies. In all instances it is important to open up the brood chamber of strong colonies for better queen pheromone distribution.

Our intention is to delay swarming by skillfully flattening the curve until the nectar flow arrives.  This is intensive management and a lot of work. Not all beekeepers wish to produce surplus honey. Such efforts will not always be successful. Swarming is such a powerful force – when we start late, after the bees are well on their journey to swarm – our chances of stopping (or delaying) swarming is lower.

We want to flatten the mite curve

With the bees we want growth to continue but with mites we want the opposite. We need to begin to flatten their growth curve in May. Start with sampling for mites via washing mites from adult bodies with alcohol or powdered sugar shake. If number exceeds 1 or 2% consider control measures.(depending upon how threatening you perceive mites)  You don’t need a knock-out punch but you need to slow mite buildup.

Essential oil products of Apiguard or ApiLife Var or formic acid (formic Pro) are chemical means of slowing mite buildup; drone brood removal and splitting are good non-chemical alternatives.  We need do this before adding supers. Formic acid use can be continued while supers are on the colony. Apivar will also flatten the mite growth curve but we need a minimum of 6 weeks for treatment and then an additional 2 more weeks before supering. We simply don’t have that much time during the spring. Apivar is best used following surplus honey removal.

The term Flatten the curve is likely to be around for quite a while with the covid-19 virus so seriously impacting our (older-aged beekeeper) population. Although not specific for viruses, honey is a valuable dietary additive to help insure human health. Bee colonies storing and beekeepers harvesting surplus honey is one way to reducing the virus’ impact.  And if we work to flatten the mite growth curve insure we can have healthy bees.