I hope your bees are OK despite our cool, wet spring weather. If you overwintered colonies from last year, PLEASE don’t forget to send in a survey to www.pnwhoneybeesurvey.com to report winter losses/survivorship and your managements for the past season. Survey is open until end of April.

March and April can be ‘challenging’ months for Oregon beekeepers. This spring is an example in point. We had one nice week in mid-March but the weather the following 2+ weeks (at least up until Easter) has been cool and wet. Plants are one or two weeks late in their development. Our bees need better conditions to expand. 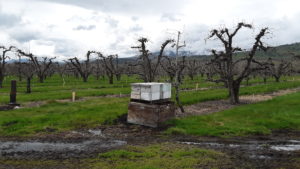 New packages and nucs have been arriving for some regional beekeepers. Delivered nucs have been strong, but with poor buildup conditions, slow to expand once hived. Package bee installations have been difficult with the cool, wet weather. There have been several instances where bees shaken into hives of foundation (or top bar hives) have died without getting organized around the queen cage. Wetting bees with oxalic acid treatment or sugar water and installing late in day with cold overnight temperatures have resulted in loss of some or most of the adult bees. It has been a spring to absolutely supplement new colonies with sugar water.

Oregon beekeepers have had two successive years of heavy overwintering losses – For WVBA losses the last three years have been 36% with year before losses at 44%. Our wet, cool spring might unfortunately mean a repeat of heavy losses this spring.  Oregon backyarder losses (reported by first 350 respondents of 2019 PNW survey) are just above 48%. Small colonies that were alive in March have not survived. Losses can be attributed to too few bees to provide a critical heat mass or insufficient food stores. If you experience a deadout do a necropsy to seek to determine what might have been reason for colony loss.

Feeding of sugar syrup and protein patties is highly recommended during spring development, especially a spring like this one when forage is very limited. Feeders need be as close to the overnight cluster as possible – at top of colony. Liquid is more helpful for small colonies as they do not have to liquefy but it can add some additional moisture stress to the bees. Mixing a thicker 2:1 syrup (more sugar less water) might marginally help. Upward ventilation and top entrances better vent excessive moisture from colonies. Bees often use this upper entrance, avoiding walking in an often empty bottom box and on the hive bottom with accumulated dead bodies and hive debris – cleaning bottom boards is recommended.

It has been noted that some weak colonies that died this spring had some capped honey, but on frames remote from the cluster. Bees were apparently not able to break from their overnight cluster to make use of their stores. Colonies with too few bees likewise had problems utilizing emergency dry sugar or crystallized honey, being unable to produce enough heat and condensate water to dissolve the sugar crystals

Strong colonies with adequate reserves continue to develop. Reversing can speed advance of smaller colonies. Colonies can be split once spring weather improves. WARNING: Strong colonies will likely “explode” once spring really arrives leading to queen rearing and swarming as there are plentiful pollen and nectar sources for them. Reversing or spreading out the brood sphere by interspersing a couple of new (drawn or foundation) frames might reduce swarm preparations.

Splitting strong colonies and reversing boxes of weaker colonies will reduce the amount of swarming and provide some mite control and help colony strength or rebuild numbers of colonies if you had overwinter losses. Splits can be given a new caged queen, developing queen cells (by transferring frames with developing queen cells into the split) or allowed to raise their own queen. Queens however are in short supply to speed split (divide) colony expansion. If colonies are allowed to rear their own queens, they will need other colonies with mature drones. Drone brood will expand and drone adult number will increase once forage conditions and the weather improves to allow the bees to get out to the flowers.