At the March WVBA meeting I distributed paper copies and directed members to a web-based survey document in a continuing effort to define overwintering losses/successes of backyard beekeepers in Oregon. This was the 10th year of such survey activity. I received 416  responses from OR backyarders, keeping anywhere from 1 to 38 colonies; Willamette Valley members sent in 38 surveys, 4 more than the previous year, reporting survivorship of 227 fall colonies.

Overwintering losses of WVBA respondents was 122 colonies = 46 %, slightly lower than the statewide loss of 38% (database of 303 OR backyarders.)  Percent losses, determined by hive types, are shown in Figure 1 comparing WVBA with the statewide backyarders. WVBA member respondents started winter with 84 Langstroth 10-frame, 60 Langstroth 8-frame hives and 4 5-frame nucs; there were an additional 4 Top Bar hives (2 lost) and 2 Warré hives (1 lost).  Losses of 8 framers was less and 10 frame losses were slightly higher compared to statewide beekeepers.

The winter losses of WVBA members continues to increase. Losses of 2018-19 were the highest of the previous 4 years and 9.5% above the 4 year average.  As with last season, WVBA losses were lower than the statewide loss level (by only 2 percentage points). Figure shows the 5 year loss record. 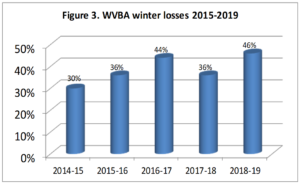 Three individuals had more than one apiary location. Loss at 2nd apiary site was 63.5% compared to 55% at home apiary. Four individuals moved bees during the year, one a new hive, one short distance and 2 for pollination.

We asked of individuals that had colony loss to estimate what the likely reason(s) might have been, Multiple responses were permitted. There were 64 selections (1.7/individual). Varroa mites (14) and weak in fall (15) were most chosen, followed by poor wintering and queen failure. Seven said don’t know. Comparison of WVBA selections with statewide in table below.

Why do colonies die? There is no single reason for loss and a good deal of variation in opinion as to what might be an acceptable loss level. We are dealing with living animals which are constantly exposed to many different challenges, both in the natural environment and the beekeeper’s apiary. We don’t know what influence our winter weather could have been a factor in heavier losses.. The four major factors affecting losses are thought to be mites, pesticides, declining nutritional adequacy of the environment and diseases, especially viruses. Management, either failure to do something or doing things incorrectly, remains a factor in overwinter losses. What effects alteration to the bee’s natural environment and other external factors play in colony losses are not at all clear.

Langstroth wrote about the importance of taking losses in fall management saying if the beekeeper neglects such attention to his/her colonies 45% loss levels may occur, depending upon variable environmental conditions. It seems the “normal” of backyard losses is 30-50%. Older, more experienced beekeepers recall when loss levels were 15% or less.  Honey production fluctuates each year but, once again, it seems to be declining on average. Despite continuing heavy annual losses numbers of U.S. bee colonies have increased somewhat since the 1970s; worldwide numbers of bee colonies have been steadily increasing.

There is no simple answer to explain the levels of current losses nor is it possible to demonstrate that they are excessive for all the issues facing honey bees in our current environment.  I will examine management selections and equate them to losses for WVBA members who completed a survey. Thanks to all who did so.