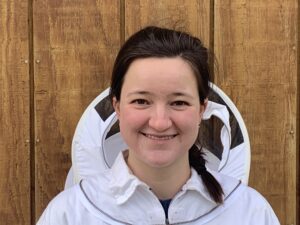 Some WVBA beekeepers may remember Emily (Cross) Painter. She served as Secretary of WVBA for a couple of years, 2014-2016 while a West Salem High student. She left then to spend a gap year in England and for last four years has been an undergraduate student at the University of Vermont. You may be interested in her introduction to beekeeping, what she has given back at still a young age and where she is now.

Emily Painter began with bees on the family farm outside of Dallas in 2009 at age 11. Actually, the bees found her. One day the water meter reader said he could not read their meter because there were bees in the meter compartment. Emily had found bee equipment in a barn and learned that her grandfather had once kept bees. With his guidance, Emily retrieved one of the boxes and set it on the water meter. The bees however had a different idea and simply took off.

The next year Emily heard that bees had moved into the discarded remnant equipment of a commercial beekeeper who once kept bees on a neighboring farm. The boxes were old but three of them had bees. With her grandfather’s help, the bees were moved late in the summer to the family farm. Alas, the bees did not survive the winter. But Emily was hooked.

Her 3rd year was a charm. Driving home from a piano recital, the family noticed bees hitting the windshield just as they were nearing the family farm. Investigating, they found a big swarm in a tree alongside the road. Emily raced home, got a box of one of the winter dead outs and placed it on the side of the road. The swarm marched right in. This colony would survive many years. Eventually she had 4 colonies under her care.

Emily joined the Willamette Valley Bee Association (WVBA) that second season. She took the club short course in 2011. At a monthly meeting she was winner of raffle prize of a 3-lb package of bees from Glory Bee in Eugene. Todd Bartlem remembers Emily as a “super nice gal and one of the few young beekeepers that came to our meetings.   A bit shy she did a very good job as Secretary and hardly ever missed a meeting or event. Emily says highlights were club summer picnics held at Susan Rackenfuss home in Salem and Apiary in Sweet Home and annual Bee Day events.

Emily served as Secretary of WVBA for 2 years during her Junior and Senior High School years. Rich Farrier, WVBA President then and still, says of Emily  “It was a pleasure working with Emily, a young beekeeper who was so thorough and timely.  It’s great to see our future generations learning the art forms of our ancestors.  I miss seeing Emily and her wonderful family”.  Following high school graduation Emily took a Gap year to live and work at Scotney Castle in Kent, England. The Castle was being renovated (aren’t they all?) and the work sparked an earlier interest in Anthropology. She kept her bee interest and had opportunities to visit a near-by cousin and view their bees during this year.

Fitting her interests, she decided to attend the University of Vermont (UVM) in Civil Engineering to obtain the education and training necessary for restoration of old buildings. During her undergraduate years she returned to England (she is dual US and UK citizen, as is her mom) to work for Whitby Wood, an engineering firm in London working on new constructions and to Ireland to work for Carrig Conservation International, a Dublin-firm specializing in preservation of historic buildings.

As it happened, during her orientation to the University she found the interest desk for the UVM Beekeeping Club. Founded in 2016, this club, advised by University of Delaware Graduate and UVM Horticulture Professor Mark Starrett, was recruiting new members. Emily immediately signed up. She would be President the next two years.

During this time, the University added a beekeeping course to the curriculum with Dr. Samantha Alger as instructor. The club grew and became very active in education and outreach efforts. Currently there are over 1000 followers on Facebook and Instagram. The club apiary was moved from the Hort farm to an on-campus location. The club offers weekly tours for students and sponsors on-campus speakers. Honey was extracted and sold in the Student Union. During the past covid year a protocol was worked out to still deliver honey with pre-orders.

Emily also joined the Student Chapter of American Society of Civil Engineers and served as their Secretary and social media chair. Now finishing her senior year, she will be graduating spring 2021. Although home during some of the covid 2020 year, Emily is headed back to England following graduation to begin Graduate studies at the University of Leeds. She will study structural engineering with an emphasis on restoration of historic buildings.

Emily has had experience with bees in OR, Vermont and England as well. She finds Vermont winters colder but drier and eastern fall nectar opportunities much better than in Oregon with abundant  goldenrod and aster. She says she likely will remain interested in bees but will need to concentrate on her education. I gave her some beekeeping contacts in the Leeds area from my travels there several years ago. And the bees on the family farm in Dallas? Her family promises to take good care of them.

I asked Emily, after Todd Bartlem asked me, if there might be some connection between civil engineering, restoration of old buildings and beekeeping? After a slight pause Emily said “Maybe there is. I guess civil engineering/restoration of old buildings is all about maintaining community structures which is essentially what the bees do in a hive”. I see her passionate about all three and believe they all will continue to be important to her.  WVBA was so fortunate to have her give back by serving as Secretary as was UVM where she was President of the student Beekeeping Club. We wish her much success in her educational endeavors.

Full Disclosure: I was an undergraduate at UVM 2000-2004; our Grange advisor (I was UVM student Grange Master) was Enoch Thompkins, author of a popular New England Beekeeping book.I did my PhD at Cornell under Roger Morse .Mark Starrett, Who started the UVM Bee club in 2016 was student in my Beekeeping Class at UD. I was one of the guest speakers of the UVM Beekeeping Club when Emily was President and at WVBA when Emily was secretary. It is truly a small world. Article on Emily will appear in APril Bee Culture magazine